Christina Aguilera 'Bound to You' live at Jay Leno 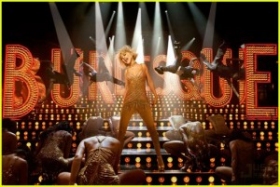 Beside attending red carpet events, Christina Aguilera also does TV performances to support her upcoming movie Burlesque. In a recent visit to The Jay Leno Show, the depicter of Ali Rose belts out Bound to You, one of the movie soundtracks.

On the November 17 episode, she also had a chat with Jay Leno about her life now that she is a single mother. It's hard, definitely. It's hard just even being a working mom and trying to balance and juggle everything on your plate, she admitted.

She continued, I like to be the first thing [my son Max] wakes up to in the morning and the last thing he goes to bed at night seeing and singing him his lullabies before bed, it means the world to me to be able to do that.,

The soundtrack compilation has been in stores Stateside since November 16, but the movie will not hit theaters across the country until a week later on date 24.

Christina Aguilera 'Bound to You' live at The Jay Leno Show :