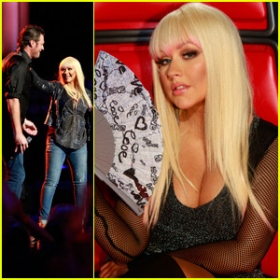 The superstar singer Christina Aguilera hit the stage on "The Voice" once again after the American Music Awards performance. She teamed up with Blake Shelton and premiered the track "Just A Fool" from her album "Lotus" on 19 November.

"The Voice" coaches tried to make a great and powerful performance. The song is a mix of romantic vibe with a country-pop influence.

Christina and Blake sang on the opposite side of the stage on stools, but then they moved together at the center stage to perform their second chorus of the track.

"Just A Fool" is a nice song and definitely, Christina and Blake made a great performance and they celebrated it by hugging and giving high-fives.