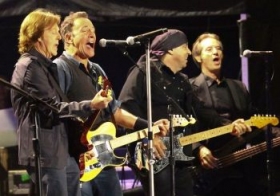 The Boss aka Bruce Springsteen took the stage on the second night of the Hyde Park festival in London on Saturday, July 14th and he was joined by Sir Paul McCartney for his headline singing two songs together.

The iconic musicians played at the Hard Rock Calling show two renditions of the Beatles' "I Saw Her Standing There" and "Twist and Shout" hits, but got cut short by organisers for breaking the curfew before they could thank the crowd. Introducing McCartney to the stage, Springsteen told the Hyde Park audience: "I don't want to make a big deal out of it, but I've been waiting about 50 years [to do this]."

The decision of cutting off the two musician prompted consternation on Twitter, with Springsteen's guitarist Steven Van Zandt leading a chorus of disapproval. He wrote: "Is there just too much fun in the world? We would have been off by 11 if we'd done one more. On a Saturday night! Who were we disturbing?"

Explaining the decision, a spokesman for event organisers Live Nation said: "It was unfortunate that the three hour plus performance by Bruce Springsteen was stopped right at the very end but the curfew is laid down by the authorities in the interest of the public's health and safety. Road closures around Hyde Park are put in place at specific times to make sure everyone can exit the area in safety."

Guitarist Van Zandt went on: "The cops got nothing more important to do? How about they go catch some criminals instead of f**king with 80,000 people having a good time? English cops may be the only individuals left on earth that wouldn't want to hear one more from Bruce Springsteen and Paul McCartney! If it's a public transport issue I'm sorry but people are adult enough to go get a train if they need to without the cops pulling the plug!"

He concluded: "I'm sorry but I have to be honest I'm pissed. Like I said, it didn't ruin the great night. But when I'm jamming with McCartney don't bug me!"

The Boss had earlier invited Rage Against The Machine's Tom Morello on stage for two songs, while singer John Fogerty also sang with him.

Hard Rock Calling wrapped up on Sunday with performances by Paul Simon, Christina Perri and Guillemots. 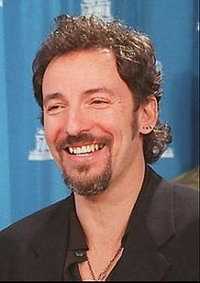