Billie Holiday remains (four decades after her death) the most famous of all jazz singers. "Lady Day" (as she was named by Lester Young) had a small voice and did not scat but her innovative behind-the-beat phrasing made her quite influential. The emotional intensity that she put into the words she sang (particularly in later years) was very memorable and sometimes almost scary; she often really did live the words she sang.

Her original name and birthplace have been wrong for years but are listed correctly above thanks to Donald Clarke's definitive Billie Holiday biography Wishing on the Moon. Holiday's early years are shrouded in legend and rumours due to her fanciful ghost written autobiography Lady Sings the Blues but it is fair to say that she did not have a stable life. Her father Clarence Holiday (who never did marry her mother) played guitar with Fletcher Henderson and abandoned his family early on while her mother was not a very good role model. Billie essentially grew up alone, feeling unloved and gaining a lifelong inferiority complex that led to her taking great risks with her personal life and becoming self-destructive.

Holiday's life becomes clearer after she was discovered by John Hammond singing in Harlem clubs. He arranged for her to record a couple of titles with Benny Goodman in 1933 and although those were not all that successful, it was the start of her career. Two years later she was teamed with a pickup band led by Teddy Wilson and the combination clicked. During 1935-42 she would make some of the finest recordings of her career, jazz-oriented performances in which she was joined by the who's who of swing. Holiday sought to combine together Louis Armstrong's swing and Bessie Smith's sound; the result was her own fresh approach. In 1937 Lester Young and Buck Clayton began recording with Holiday and the interplay between the three of them was timeless.

Lady Day was with Count Basie's Orchestra during much of 1937 but, because they were signed to different labels, all that exists of the collaboration are three songs from a radio broadcast. She worked with Artie Shaw's Orchestra for a time in 1938 but the same problem existed (only one song was recorded) and she had to deal with racism, not only during a Southern tour but in New York too. She had better luck as a star attraction at Cafe Society in 1939. Holiday made history that year by recording the horribly picturesque "Strange Fruit," a strong anti-racism statement that became a permanent part of her repertoire. Her records of 1940-42 found her sidemen playing a much more supportive role than in the past, rarely sharing solo space with her.

Although the settings were less jazz-oriented than before (with occasional strings and even a background vocal group on a few numbers) Billie Holiday's voice was actually at its strongest during her period with Decca (1944-49). She had already introduced "Fine and Mellow" (1939) and "God Bless the Child" (1941) but it was while with Decca that she first recorded "Lover Man" (her biggest hit), "Don't Explain," "Good Morning Heartache" and her renditions of "Ain't Nobody's Business If I Do," "Them There Eyes" and "Crazy He Calls Me." Unfortunately it was just before this period that she became a heroin addict and she spent much of 1947 in jail. Due to the publicity she became a notorious celebrity and her audience greatly increased. Lady Day did get a chance to make one Hollywood movie (New Orleans) in 1946 and, although she was disgusted at the fact that she was stuck playing a maid, she did get to perform with her early idol Louis Armstrong.

Billie Holiday's story from 1950 on is a gradual downhill slide. Although her recordings for Norman Granz (which started in 1952) placed her once again with all-star jazz veterans (including Charlie Shavers, Buddy DeFranco, Harry "Sweets" Edison and Ben Webster), her voice was slipping fast. Her unhappy relationships distracted her, the heroin use and excessive drinking continued and by 1956 she was way past her prime. Holiday had one final burst of glory in late 1957 when she sang "Fine and Mellow" on The Sound of Jazz telecast while joined by Lester Young (who stole the show with an emotional chorus), Ben Webster, Coleman Hawkins, Gerry Mulligan and Roy Eldridge, but the end was near. Holiday's 1958 album Lady in Satin found the 43-year old singer sounding 73 (barely croaking out the words) and the following year she collapsed; in the sad final chapter of her life she was placed under arrest for heroin possession while on her deathbed!

Fortunately Billie Holiday's recordings have been better treated than she was during her life and virtually all of her studio sides are currently available on CD. 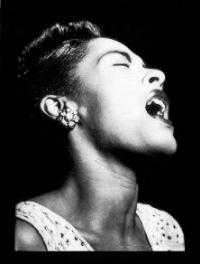