The fate of gospel music was forever altered in 1956 when a 14-year-old choir girl named Aretha first belted out "Precious Lord" for a congregation of 4,500 at Detroit's New Bethel Baptist Church. What followed this conception of the legendary "Lady Soul" is nothing short of amazing grace -- more than a dozen million-selling singles, 20 No. 1 R&B hits, a cover story in Time, a civil rights award from Martin Luther King Jr., a spot in the Rock and Roll Hall of Fame, 15 Grammys (including a lifetime achievement award in 1995) and a role alongside John Belushi and Dan Aykroyd in the cinematic jewel,The Blues Brothers.

Aretha Franklin's lifetime devotion to song, though often interrupted by personal turmoil and tragedy, created a soul standard that remains unchallenged and unbroken today.Aretha Franklin was born on March 25, 1942 in Memphis TN to a respected gospel singer and powerful orator who encouraged young Aretha, Carolyn and Erma to hone their voices and free their spirits. The three sisters sang in the church choir every Sunday, listening to the sermons of their father, Rev. C.L. Franklin, and rubbing elbows with future stars like Smokey Robinson and Sam Cooke.

An untouchable force behind the microphone, Franklin hit a stumbling block when she became a 15-year-old unwed mother. By age 17 she had two sons in Detroit and a future waiting in New York, so in 1960, Franklin's grandmother took the children and loaded their young mother on a bus to Manhattan, where she began recording demonstration tapes and attracting national attention. After declining offers from Motown and RCA, Franklin was finally snatched up by Columbia Records' renowned talent scout John Hammond. The Columbia years proved controversial and confusing for Franklin, who was shepherded into unfamiliar pop music territory rather than her native R&B. Criticized as a white company that did not appreciate Franklin's talent, Columbia produced 10 respectable albums, but only one bonafide pop hit in six years: "Rock-a-bye Your Baby with a Dixie Melody." When her contract expired in 1966, producer Jerry Wexler pounced on the raw talent, signing her to Atlantic and immediately digging into her R&B roots.

Wexler pushed Franklin into a cauldron of red hot blues when he brought her to the Florence Alabama Music Emporium studios in Muscle Shoals. There Franklin was to record with a crew of versatile and talented musicians like Cissy Houston, Duane Allman and Eric Clapton, but a drunken brawl between then-husband/manager Ted White and one of the musicians put those plans on hold. The singular completed work from Muscle Shoals, "I Never Loved a Man (the Way I Love You)," was a gospel-charged sensation that convinced Franklin to finish the album in New York. 1967's I Never Loved a Man was the first in a long line of LPs that brought America to its knees.

During the next three years, Franklin burned with passion and intensity, selling millions of albums with Top 20 gospel-crossover hits like "Respect," "Baby I Love You," "Chain of Fools," "Since You've Been Gone," "Think" and "The House That Jack Built." These radio staples contrasted with her Columbia recordings in their raw R&B foundation, upon which Franklin built an eclectic structure of gospel, blues, pop and rock. Perhaps the most stimulating song of its time, "Respect," took on several empowering translations during the era of black activism, feminism and sexual liberation. A rallying cry for social progress, "Respect," won Franklin two Grammy awards and an honorary award from Martin Luther King Jr. -- a man she would later eulogize with an uplifting rendition of "Precious Lord." While fame tumbled down upon her, Franklin led a personal life of hardship hidden from the world.

Her troubled eight-year marriage to White ended in 1969, after they had a son, Teddy Jr. That same year her father was arrested for possession of marijuana and she was rumored to be drinking heavily, but Franklin did not allow her personal strife to shut down the hit factory. "Bridge Over Troubled Water," "Don't Play That Song," "Spanish Harlem" and "Rock Steady" were just a few of the hits Franklin scored in the early '70s, during which time she also gave birth to a fourth son, Kecalf, out of wedlock.

Franklin won Grammy awards every year between 1969 and 1975 (Natalie Cole won in 1976), and even sang at President Jimmy Carter's inauguration, but by the end of the '70s her record sales were beginning to dwindle.Aretha's final album for Atlantic was titled 'LaDiva', and it didn't do much to restore ReRe's chart domination. Franklin gave her career a kick-start in 1980 with a cameo appearance in The Blues Brothers, a movie that introduced Franklin to a younger audience. That same year she left Atlantic for Arista, which produced sleek new hits like "Freeway of Love" and "Who's Zoomin' Who." Franklin's first Arista album, 'Aretha', released one year after her father died of gunshot wounds suffered during a robbery attempt at his home, became her highest charting album since 1972.

The album included Aretha's soulful rendition of the Doobie Brothers classic 'What A Fool Believes', and it fared better than any of her final 3 albums for Atlantic.The next album, 'Love all The Hurt Away', was a moderate success in 1981 that featured a duet by Aretha and the legendary George Benson on the title track.At this point, Clive Davis decided to tap the 'hot' Luther Vandross & Marcus Miller to produce the 1982 hit album & title track, 'Jump To It'.Aretha's return to the top of the R&B charts was long overdue, and Arista wanted more hits, so Vandross & Miller returned for 1983's 'Get It Right', which continued the formula they used 2 years earlier, and the response was lukewarm at best.

After a 2 year hiatus, Aretha was teamed with the talented Narada Michael Walden, who produced her comeback hit album 'Who's Zoomin' Who ?' in 1985.The album won critical praise, and Aretha returned to the top of the Billboard charts with her most successful Arista project, which also earned The Queen the 1985 Grammy Award for the hit 'Freeway Of Love'.This was Aretha's first award since 1974, and her greatness was reaffirmed. The 1987 follow-up album, 'Aretha', included the Grammy-winning & #1 smash duet with George Michael, "I Knew You Were Waiting (For Me)".While her pop comeback continued in 1987, Aretha also returned to her gospel roots with 'One Lord, One Faith, One Baptism', which also earned her a Grammy for Best Soul Gospel Performance.In 1987, Aretha Franklin became the first woman inducted into the Rock and Roll Hall of Fame, while also winning multiple Grammy Awards. 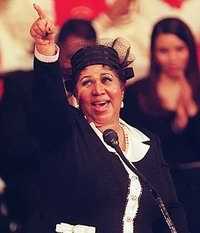