Arctic Monkeys - Do Me A Favour

Well the morning was complete, there was tears on the steering wheel

Dripping on the seats.

I'll have the cheek to say they're equally as bleak.

The beginning of the end, apartment on the hill,

And it's the bit around the bend, ask anyone they'll tell you that.

It's three times at it's end,

Start to breaking up, start to fall apart

Oh! hold on to your heart.

Do me a favour, unbreak my nose!

Do me a favour, tell me to go away!

Do me a favour, stop asking questions!

She looked away while her shoes were untied

And the eyes were all red'

You could see that we cried, and I watched and I waited,

'Till she was inside, forcing a smile and waving goodbye.

Two will be too old, will force you to be cold.

And do me a favour, I'm asking you to give some help!

She said,'do me a favour and suffer in yourself',

Ah, to tear apart ten times a fight, I'm not so hard as on that July,

And after all I dream tonight! 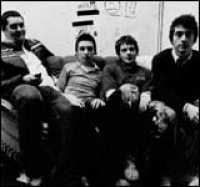