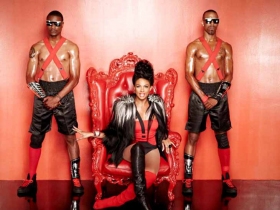 This is Alesha Dixon's "Drummer Boy" music video which was directed by Ray Kay has made its way out for viewing pleasure. The British singer is seen sitting on a throne with two shirtless men guarding her on both sides. She also joins a number of dancers in energetic drum moves.

"This single, for me, is an event," Dixon said. "When you hear the drums it makes you want to move. It's an empowering song where the women are on top! It felt like the perfect song to kick start the album with."