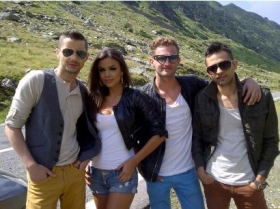 The Romanian boy-band Akcent(Adi Sina, Mihai and Sorin) has revealed the much awaited music video for their song 'Feelings On Fire' which features a sexy new voice, Ruxandra Bar.

The boys filmed the clip in Romania, on the well known Transfagarasan Highway, called by Top Gear Team as The Best Driving Road in the World. We love the wide view, the green of the mountains, the beautiful girl and of course, the super cars they're driving in a "Fast and Furious" race! Watch the clip below: