8BALL AND MJG - Who Can You Trust? lyrics

Ain't it funny the things we do to get paid?

The shit we do to show niggas that we ain't afraid.

Yeah, I got my education on the streets,

Doin dirt left a nigga with some muddy feet.

So much I could've done, but I didn't do.

A lot of shit a nigga never should've went through.

Trustin another soul with my fate,

Showed me how easily love can turn to pure hate.

Good or bad, I'm a still be the nigga winnin, NOW

Maybe I can see the future through my young seeds.

Plant it, and hope the planet don't damage them.

Who can you trust? God only knows.

It's hard to say who you can call friend or foe.

Money, that's all a nigga will die for.

So much pain and everybody wants more.

So much pain, drownin my brain, I need a paper towel.

Wrap it 'round, soak up the strain, I feel safer now.

Lookin' down the road I've travelled-it's been a bumpy one.

The walls that I stood on was Humpty Dumpty ones.

I feel like one of them pieces up in a chess game,

On the line, defending yours from mine.

If the move seems a little bit awkward, it ain't me.

I bet you drop some cash on the ground, they'd holla &quot;MINE!&quot;

You far behind, man I'm way too ahead, I might be gone.

Think you had some killers ridin with you, you're home alone.

Holes down deep in the wall, I can't get into them.

I'm friend to them, real ass niggas and family members.

What you say, nigga I owe you something? I don't remember.

The root of all evil they say, but yet, there's so much evil in all our

roots. Born in a world of a nigga, some knowing, some not knowing. Even

so, we've accomplished so much but still we have so far to go. C'mon man,

we're born hustlers, and together we'll be greater later. Used to die for

I'm guilty of all that shit and more.

Questioning life, asking what am I here for?

To some, that might seem strange but you dig this,

Don't get your feelings hurt, personal and business.

Lame niggas with no nuts end up embarrassed.

Compromise and commercialize, in the eyes of your niggas,

selling out to get the prize.

At the same time, my baby cries,

I'm on a cell phone,

in another state doing sound checks.

Tryin to make my little niggas' lives a little better,

I ain't trying to be better than,

only as equal, as the better man.

You can only imagine the ghetto,

if you ain't raised in it.

That's where I'm from,

childhood glory days in it.

I wade in it, what? The waters.

Take me on down the stream, I'm going farther.

It's still from coast to coast, shore to shore.

I stand accused of being a pimp, from root to floor.

As soon as you think it's time to chill,

God damn it be, time for another project, another dealine.

Man, we're at the end of this rhyme, and I done said mine.

[music fades out with women singing...] 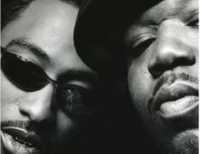