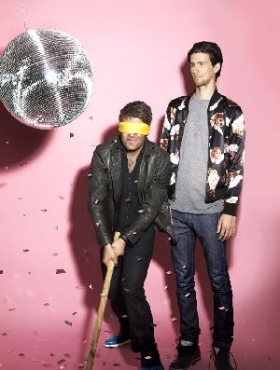 When two guys are chasing the same girl, it's much funny to find the third one is gonna hook up with her ain't it?! We totally love the story. And that's exactly what happens in 3OH!3's latest video in support of their single "You're Gonna Love This."

Slated to appear on the hard-partying boys' forthcoming Omens, the clip follows a slightly tipsy Nate and Sean as they make poor decisions and try to score with a hot babe in, you guessed it, VEGAS. The catchy video see the both singers as they are trying to impress a hot chick

They try to attract the lucky lady by performing arduous tasks such as hitting a golf ball into a garbage can, landing a ping-pong ball in the other's drink, and finally, hiring a private helicopter to dunk a basketball in a pool. In the end, both dudes lose out to a Tom Cruise impersonator. The video was directed by Samuel Bayer, who helmed each of the band's videos from their American Idiot era, and you may check it out in here.

"You're Gonna Love This" music video by 3OH!3